Everything you need to know about teaching English in Spain

Spain is a vibrant country to teach English and is famous for its legendary cuisine and nightlife. It is one of Europe’s most popular countries for studying and teaching in and this article looks at what to expect when you choose to make this destination your next hub abroad. 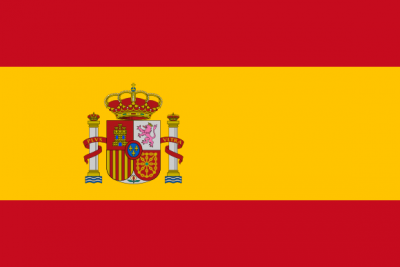 Spain is an EU member state, positioned in the south-west of Europe and sharing its coastline with the Mediterranean Sea on its right and the Atlantic Ocean to its west. To the north, it shares a land border with France and patiently positioned to its west is the other country which makes up the Iberian Peninsula: Portugal. Spain is a country that loves to celebrate life and La Tomatina festival is an excellent example of this joie de vivre. Hemingway was here, as was Orwell. And so too can you be.

Throughout Spain, with the only real exception being Madrid, the average hourly rate for teachers of English tends to hover around the 15 – 25 Euros mark. You probably shouldn’t expect to go to Spain to save money, but while you are teaching there, you will enjoy a relatively comfortable lifestyle if you are prepared to put the hours in.

An international TEFL certificate from a reputable school is the main prerequisite for landing a job here as a college degree isn’t mandatory, but having a college degree (in any subject) can sometimes introduce you to the better paying jobs.

The main bulk of teaching work is centered in Madrid and other major cities, and many teachers do choose to teach English in Spain because of the opportunity to learn or further their Spanish language.

An important point to note is that unlike some other European destinations, such as the Czech Republic, language schools will generally insist that you follow a preassigned course curriculum and you won’t have as much freedom to tweak the curriculum as in some other countries.

Spain is a wonderful country, with so many opportunities for teaching English and is a relatively easy country to get yourself established in. It might seem daunting to you, but schools rarely employ from abroad so to get started teaching English in Spain, you will need to look for work once on the ground.

Please remember that at tefl online pro we assist our graduates with ongoing job support, help and advice, so if you are thinking of making Spain your next teaching location, feel free to contact our International Job Guidance Team and we will ensure that the transition is a smooth one.

Madrid is Spain’s capital city, with roughly three million inhabitants, and the wide, elegant boulevards that crisscross the city like cosmopolitan veins of imperial sovereignty mnemonically juxtapose the country’s days of empire past with artistic and financial center present. This is where you will find the most English teaching jobs in the country, and where you can expect to be earning anywhere up to 50 Euros per hour. With the higher rates of pay though the higher local costs do match, but it still offers good value. 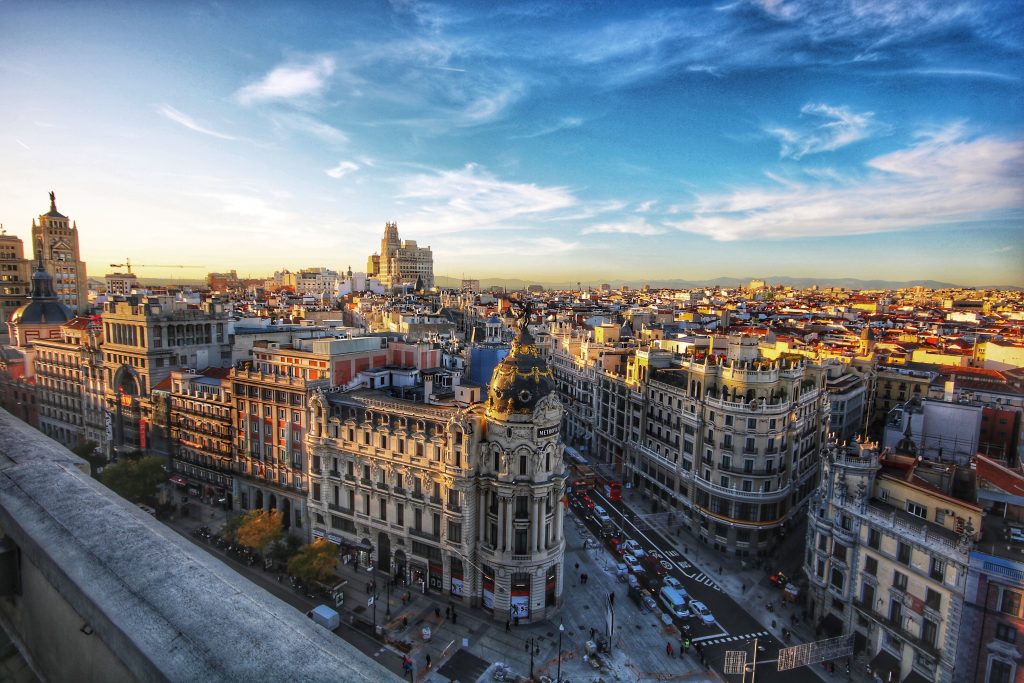 Teaching English positions in Spain are open to native and non-native English speakers, and also to EU and non-EU citizens.

It must be noted here that wherever you apply for work within the EU, an EU citizen will always receive first priority for any position. And this is because it is a much simpler option for the schools with regards to the work visa process. EU citizens don’t require a work visa to teach English as a foreign language in Spain and all is required of them is to hold an internationally recognized TEFL certificate from a reputable school.

However, there is just so much teaching work available in Spain that there is more than enough to go round and non-EU citizens also find little difficulty in securing well-paid, local teaching positions.

We definitely recommend looking for work once you are on the ground and the affordable cost of living in Spain makes this a viable option. When you first arrive, you will be granted a 90-day Schengen visa and this will provide you with enough time to secure a teaching position and process your work visa. 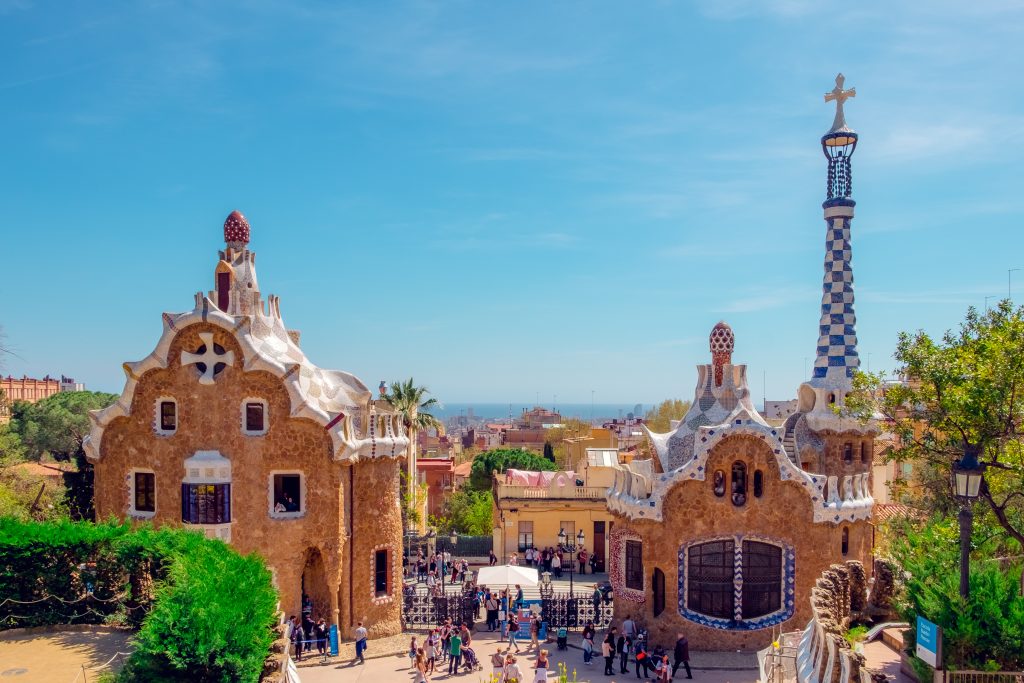 Barcelona has featured in the international news fairly recently for its insistent push to break away from the Spanish government and gain its independence. You might even have witnessed examples of violent clashes online between leavers and remainers, but the cosmopolitan capital of Spain’s Catalonia region is now stable again and is the most popular destination to teach English in Spain. Business is booming and although it is an expensive city, if you avoid the tourist areas you can expect to live comfortably.

While it isn’t necessary to have knowledge of the Spanish language to teach English in Spain, we do definitely recommend learning some basic phrases if you have no prior learning Spanish skills.

Having a basic knowledge of the language will make things that more easier for you when it comes to day-to-day tasks and helping with classroom management.

The good news is that Spanish is undoubtably one of the more easier languages to learn to speak and you will soon find out that by learning for just half an hour daily that you will begin to pick it up very quickly. There are regional dialects, but the differences are not so extreme (with the exception of the Basque dialect that is) and knowing at least some of the local language will definitely help open more doors for you.

Another important tip to note regards obtaining your NIE (Número de Identificación de Extranjero) number. This is your personal and unique tax identification number and is required of you to have if wanting to legally work in Spain. With your NIE, you can also use it to rent an apartment, open a bank account, join a gym or a library, sign a mobile phone contract and basically integrate into local Spanish life.

Valencia, a port town on Spain’s southeastern coast, is an architect-lovers wet dream and also boasts some phenomenal beaches. It comes over as being a friendly city, with a chilled vibe about it and the possibilities for teaching English here are many. Local costs are lower than the larger cities of Barcelona and Madrid, and as an example, one of our graduates who is teaching there now pays just 430 Euros per month for his apartment and utilities and secured a teaching job within one week of arrival in the city.

Over the past 10 years or so, Spain has been experiencing economic hardships and one of the results of this is the high rate of unemployment which has driven many young Spaniards abroad in search for work.

However, the English language industry is buoyant – teachers are still in high demand – and it seems that while people do have less money to play around with, they are nonetheless still making learning English a high priority, with a clear understanding of the benefits that come with learning English as a foreign language.

Therefore, Spain is still an excellent location to teach English in and shows no sign of slowing up any time soon. 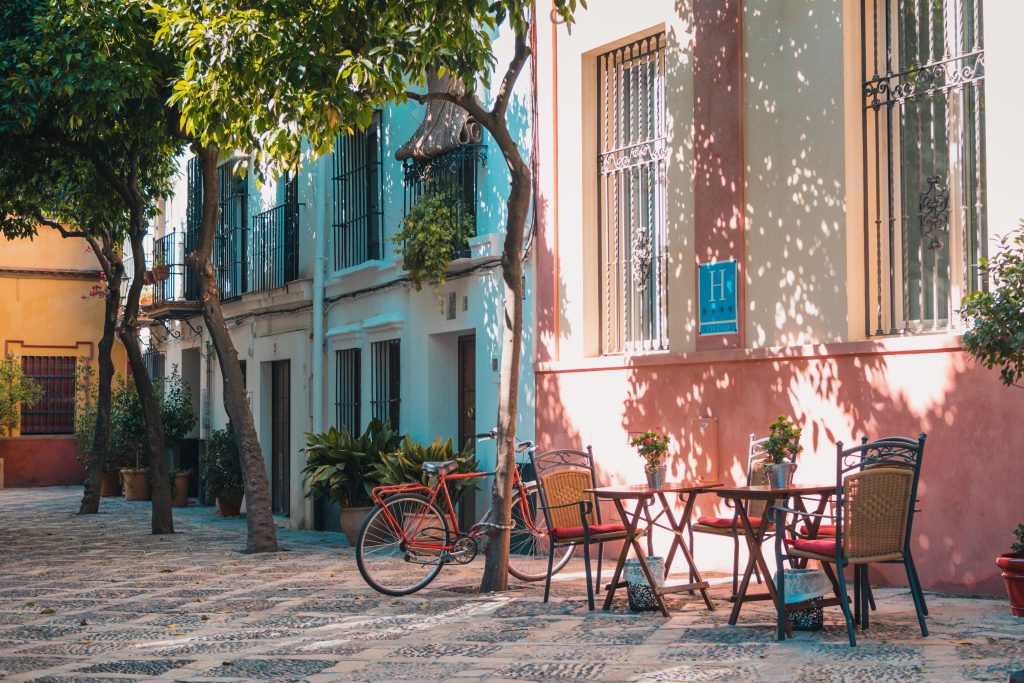 Seville, famous for its citrus industry and flamenco dancing, is the capital of Spain’s southern Andalusia region. One of the advantages of living in Seville is that everything seems to be within easy reach of distance and the public transport complements the city scape. Come here to experience the festivals of Feria and Semana Santa and to experience teaching English in a smaller city which punches well above its weight. There are over 50 language schools located in Seville, so the possibilities for you here are many.

We feel that no write-up on Spain should be without a mention of El Camino de Santiago de Compostela (The Way of Saint James.)

The Camino is a popular pilgrimage walk – typically starting in the quaint, French town of Saint Jean Pied de Port and finishing in the northwestern, rain-drenched, Galician city of Santiago de Compostela – and leads pilgrims on a spiritual journey across the diversely-rich north of Spain.

Thousands of pilgrims make the (approx.) 500-mile walk each year, and it is a fantastic experience where you will get to tone up your body, tune in your mind and get to meet some absolutely wonderful human beings. People walk El Camino for many reasons, so don’t think that you necessarily need to be religious to take part in this majestic, extended walk. Both young and old make their merry way along its trail – following yellow-painted arrow direction signs and forming strong bonds with fellow pilgrims, be they walking for religious reasons or otherwise. And upon completion, they then hop on a modern form of transport to comfortably teleport themselves back home again.

But in the early times of the Camino – often navigated by the aid of the Campus Stellae – it was considered an act of penance to attempt the walk for the divine purpose of the cleansing of one’s sins, which many pilgrims never returned from, due to robbery or sickness, and the traditional starting point used to be from one’s own front door. If they were lucky to survive the long, arduous walk there – obligated to earn their food and keep through monastery chores along the way – they’d then have had the mandatory necessity of turning their backs to the setting sun and attempting that very same perilous, long-stretch back home again. At one time there were so many incidents of robbery along this and other pilgrim routes that the Knights Templar were established to protect pilgrims. But that’s another story entirely.

There are actually many camino routes throughout Spain but the Camino Francés, being the most popular of modern camino routes, is the fashionable path of today’s smartphone app, spiritual generation on the move and there are in fact many other ancient routes crisscrossing Europe’s continent, like well-trodden, earthen Ley Lines under the map of star formations in the heavens above. Most today stop at Santiago de Compostela, while some continue the 80km route further to the end of the ancient world: Finisterre. We totally recommend the experience and also recommend that you should budget four weeks to complete the full section of the walk.

Bilbao is located on Spain’s north coast – a relative short hop from Santander’s seafood capital – and is at the heart of Spain’s Basque country. It’s here that you will find yourself eating pinchos (pintxo) as opposed to the tapas found in other parts of the country. And being also relatively close to the Rioja region, the quality of wine here is legendary. There is also a healthy share of teaching work available and the lower living costs make this city – known for its Guggenheim Museum – a significant teaching English location. 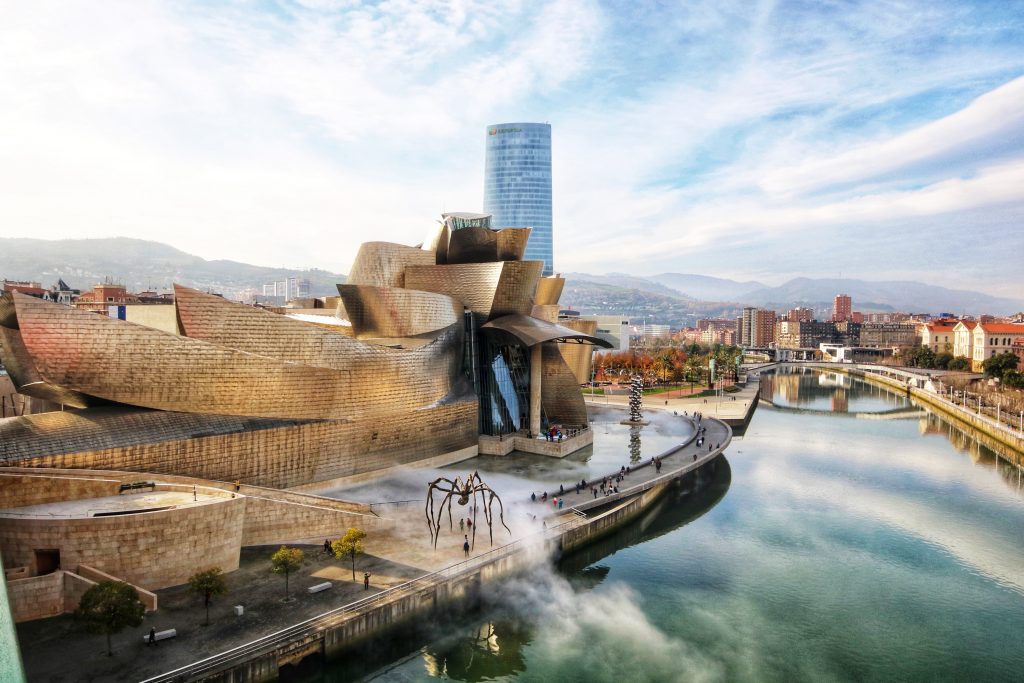 TEFL Online Pro video testimonials can be viewed on the Reviews page of our school website:

Our customers have also left verified reviews on the TEFL Online Pro official Facebook page, where we are currently rated 5 out of 5:

Where will you teach English?